In recent months, members of the Australian Institute of Architects have received a stream of emails addressing substantial changes underway within the organisation. The changes target the very heart of the Institute and systematically rethink the way it functions.

This is a subject I’ve discussed previously (see Why I’m a member of the AIA and A better AIA), so have followed the proposed changes with keen interest. For those of you who’ve missed the detail arriving in your inboxes, here’s a brief summary:

These are some big changes. To offer a sporting analogy, we have a new coach, a couple of expensive yet underperforming players have been scrapped, and – should the new Board be implemented – we’ll have a whole new way of making decisions about our footy team.

I think there are a few important questions that need to be asked: why is reform necessary? Are the proposed reforms the right reforms? And what happens next? For some of my more skeptical readers, you might even suggest that there’s a more fundamental question to be asked first: why is the AIA itself necessary?

Why is the AIA necessary?

I tackled this question in detail in Why I’m a member of the AIA, but let me repackage my thoughts in an easy 4-step answer:

That is to say, we’re up shit creek and the AIA is our paddle.

Now, there are many organisations advocating on behalf of the architecture profession in Australia. There are the AAA, the ACA, Parlour, the Robin Boyd Foundation, ArchiTeam and many others. All are membership organisations seeking to further the AIA’s own purpose, that is “to improve our built environment by promoting quality, responsible, sustainable design.”[5]. All do good work, but none boast the history nor member saturation of the AIA. They’re the small forward crumbers to the AIA tall timber.

The AIA is necessary now more than ever. The architecture profession is already in a state of crisis, can you imagine how much worse off we’d be without our biggest collective organisation?

Why is reform necessary?

The Institute has experienced successive years of alarming financial difficulty. Annual reports from 2012 to 2015 show negative cashflow from operations to the tune of $18,000,000.[6] While the majority of these losses are offset each year from other activities, over this same period the Institute saw real losses of around $3,000,000.[7]

In both the 2014 and 2015 annual reports, the independent auditor concluded her analysis by stating that the losses incurred “indicate the existence of a material uncertainty that may cast significant doubt about the ability of the company and the consolidated entity to continue as going concerns.”[8]

As a member, it is deeply unnerving for me to discover that the day to day activities of the Institute have been so financially unsustainable over such a long period. The auditor’s words really strike home: business as usual at the AIA may very possibly lead to bankruptcy.

Put simply, reform is an inevitable and essential ingredient in keeping the AIA afloat.

Are the reforms the right reforms?

Jon Clements, National President of the AIA, has been instrumental in orchestrating reform at the Institute. I’ve spoken informally with him on this question, and have been left with the lasting impression that national leadership is acutely aware of the crisis currently faced by the AIA, and is doing everything in its power to overcome it.

The closure of Architext and the Newcastle division are the most easily identifiable changes, but they’re not the most important. I suspect they’re merely the low hanging fruit that give weight to the new mantra of “a more focused strategic plan embracing three core pillars – membership, advocacy and education.”[9] The theory being that the AIA will progressively shed activities that fall outside these areas of operation, thus spreading their resources over a smaller area.

Much more important is the governance review undertaken by Henry Bosch. To understand what is being proposed, I suggested you head to the governance page of the Institute’s website, which summarises the changes and includes this neat infographic: 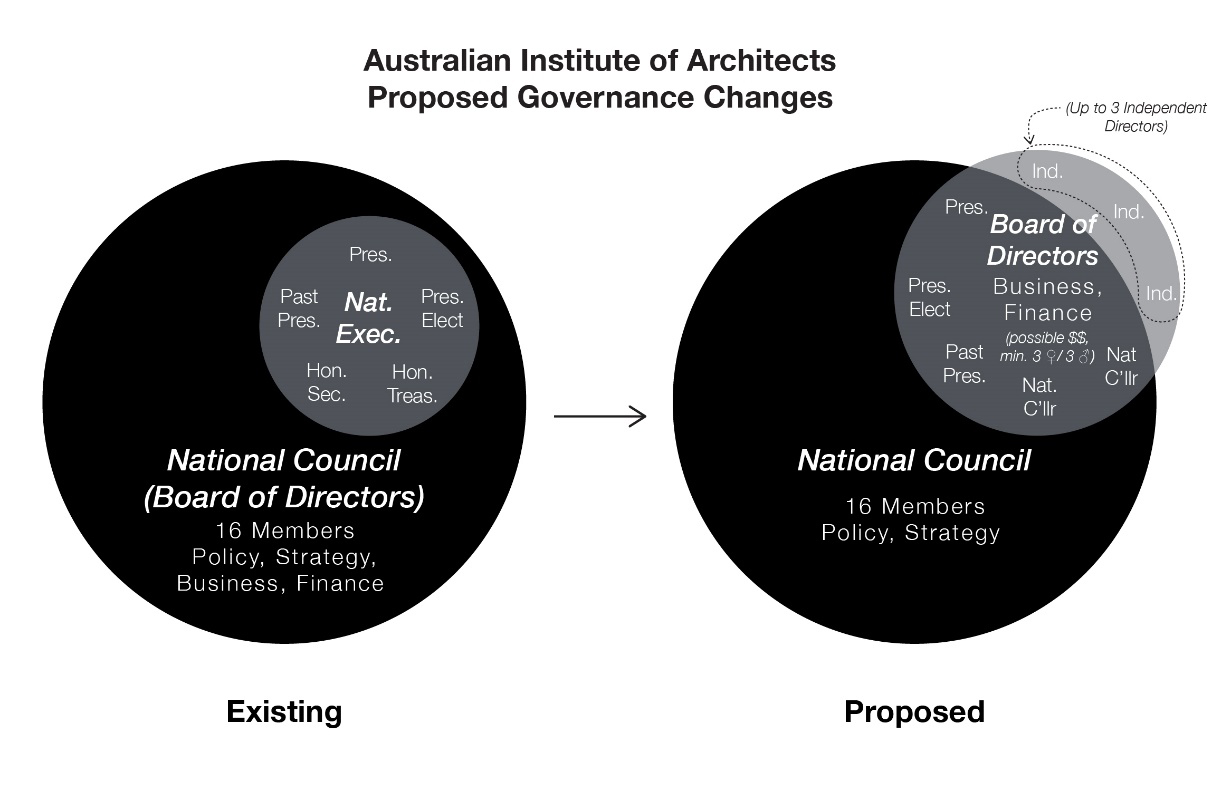 Bosch’s review identified that the existing AIA leadership structure (on the left) is unwieldy, and impedes good governance practices. Currently, the National Council meets only three times a year. In these meetings, Councillors are expected to address and decide upon issues spanning policy, strategy, business and finance – an enormous agenda to slog through in just two days. The National Executive meets more regularly, but isn’t empowered to approve expenditure, meaning all decisions need to head back to the the next Council meeting for approval.

This governance pathway is tortuous, obstructs good information flow and regularly leaves local Chapters in the lurch while they wait for new initiatives to be approved.

Bosch advised that effective governance requires a smaller, more focussed board derived from National Council with independent directors to add specific expertise in areas like the law, accounting and marketing. Thus the AIA’s proposal (on the right) is to establish a Board of Directors that addresses business and finance, leaving National Council to focus on policy and strategy. Council will still meet only three times a year, but the Board will meet as often as every month. This division of duties learns from corporate structures to create a much more nimble and responsive leadership arrangement.

It’s important to recognise that this change in leadership structure will not automatically fix the AIA’s current financial crisis, nor is it intended to. Instead, it acknowledges that crises only occur when leadership is not successful in its role. Asking sixteen volunteer Councillors to meet once every four months, cover an enormous quantity of material each time, and then make effective decisions across many areas of AIA operations might work okay when it’s plain sailing, but is horribly ineffective when the seas get rocky.

A more nimble leadership will be better empowered to begin the process of rebuilding. Really, it is just the first in a series of important steps towards reform. With a new structure in place, the strategic plan for the AIA can also be updated, which in turn can flow via the new core pillars (membership, advocacy and education) into day-to-day activities. I’m not convinced the pillars actually exclude anything the Institute is doing now, but am happy for the reform process to play itself out. Ultimately, I’d like to see more aggressive tightening over the next couple of years, driven by a new strategic plan and a systematic appraisal of the cultural and financial benefits of all existing activities.

As I’ve stated before, I also think the AIA needs to focus on increasing its member saturation within the profession. Like any governing body, cutting expenditure is only one half of the equation, the other is to increase revenue. With only 45% of registered architects opting in as AIA members, there’s a huge pool of untapped financial support waiting to be leveraged from the other 55% of the community.[10]

The governance review has already evolved beyond Bosch’s initial proposal. Feedback was sought from members last month, importantly resulting in a gender equity commitment from the AIA to mandate a minimum of three women and three men on the Board of eight directors.[11] As the leadership structure is established by the AIA constitution, a lengthy draft of the required amendments has also been produced and circulated.

The next step is to commit to the leadership reform.

This will happen on Friday the 13th of May in Melbourne, at the Institute’s 87th Annual General Meeting. As a vote on a change to the constitution requires a minimum of 75% of the vote to pass, there is currently a push across the country to contact members for their support. In Victoria, this happened via a special email from Victorian Chapter President, Vanessa Bird.

I strongly echo this push.

It goes without saying that the AIA needs to stay afloat financially if it’s to continue it’s work. The scary evidence revealed in recent annual reports proves in no uncertain terms that business as usual is unlikely to ensure this. Major reform will give the AIA a better chance of stemming the losses of recent years, and enable leadership to improve the Institute’s role as peak body for the architecture profession. Most significantly, I believe that the survival of our profession is inextricably tied to the survival of our peak body. If it sinks, so do we.

Please consider this article an entreaty to either vote for leadership reform in person at the AGM next month, or if you can’t attend, to support Item 6 of the AGM proxy form.