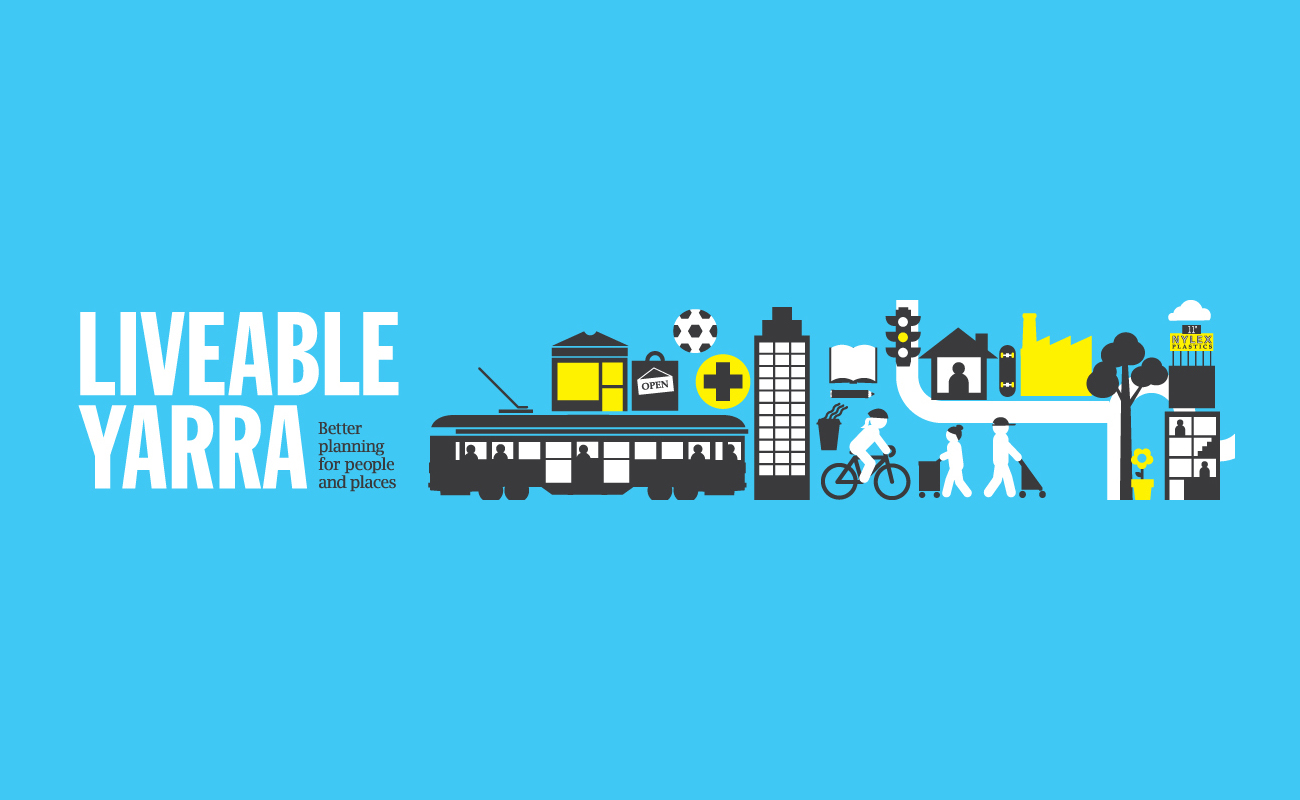 The City of Yarra recently undertook an engagement programme to canvass community opinion on future planning. The programme, Liveable Yarra, gathered local residents together for four half-day sessions to discuss and analyse the built environment, transport, housing and business. It asked participants to consider the shape of Yarra 20 years from now, by which time the local population is expected to grow from 85,000 to 115,000.

The programme, or people’s panel, covered a broad range of topics including urban density, streets, car parking, active ageing, job opportunities, heritage and housing affordability. It marked the early stages of a lengthy process that will eventually result in a new municipal strategic statement for Yarra.[1]

My involvement with Liveable Yarra began after a random mail drop to 10,000 Yarra households and an open invitation distributed via council newsletter. I was among 150 people who volunteered to take part, and the 60 selected to represent the diverse demography of Yarra.

Being an architect likely had no influence on my selection, but it is why I volunteered in the first place. I was eager to offer my expertise, and have a meaningful impact on planning policy within my neighbourhood. Like most architects, my primary contact with local council is at the statutory end of the planning spectrum – seeking approvals for projects on which I work. This is often an adversarial form of engagement, and one I’m happy to do without. Liveable Yarra was a chance to get involved at the strategic end, to help shape the broad principles that will govern Yarra’s future urban fabric.

I was fascinated to learn that I wasn’t alone in my eagerness: I met two other architects taking part for similar reasons to my own. Statistically, this is an enormous anomaly: there is only 1 architect for every 1,500 Victorians, yet here were 3 in 60.[2] For a profession that is most comfortable talking to itself, it was heartening to discover two fellow practitioners volunteering to step into planners’  territory. 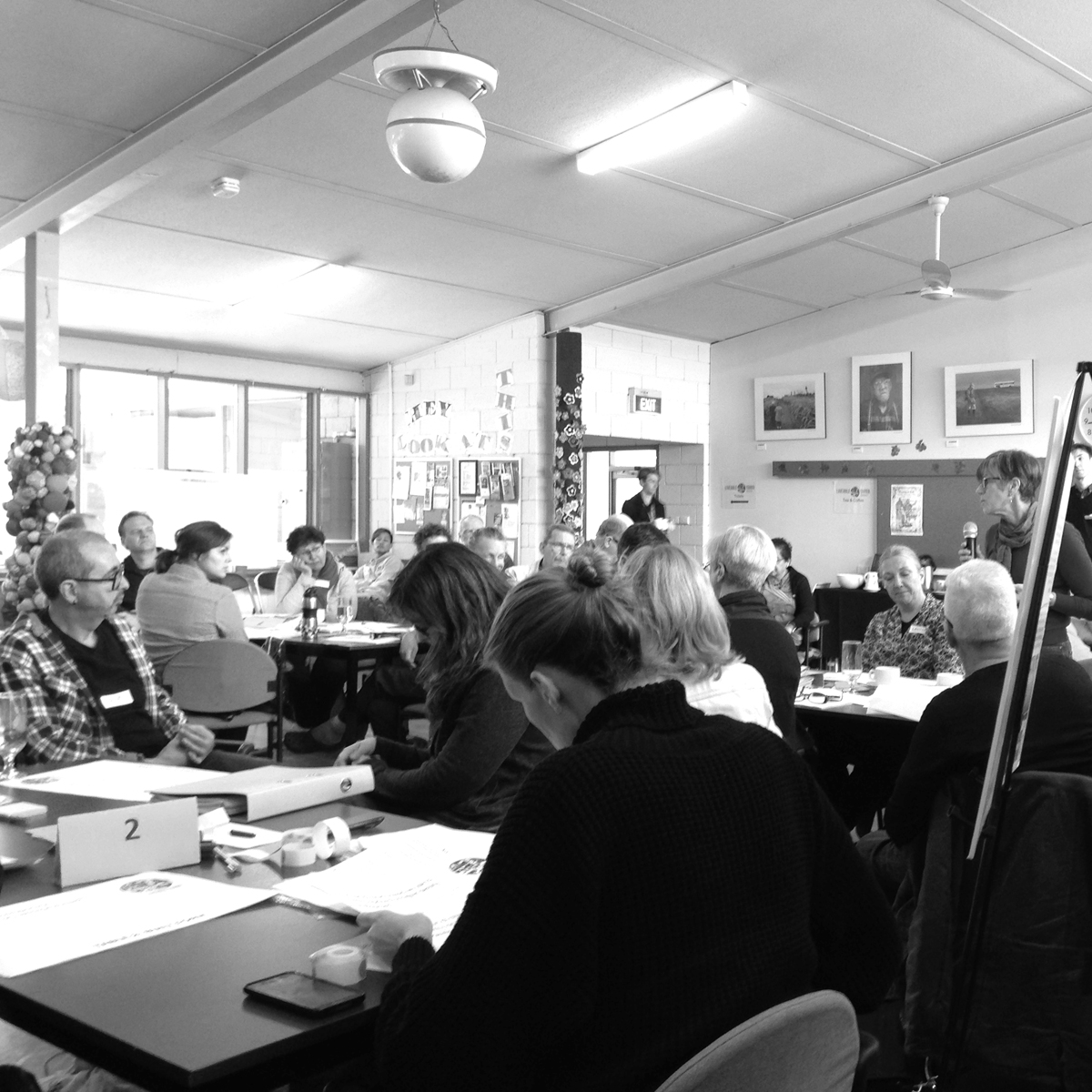 Liveable Yarra was impressively coordinated by the City of Yarra and community engagement specialists, Capire. I felt they executed a well-conceived and well-funded event: this was clearly no publicity stunt, but a serious commitment to the local community and our diverse opinions.

Indeed, by describing the people’s panel as merely four half-day sessions, I really do it an injustice. Liz Mackevicius, part of the City Strategy team at Yarra, explained that council began work on it almost a year ago. Staff from multiple departments prepared comprehensive briefing documents on the main discussion themes, then worked collaboratively with Capire to design the panel format. Handling the call for interest and subsequent applications would themselves have been a huge logistical challenge.

The sessions were spread across August and September at two-weekly intervals, throughout which both the Yarra and Capire teams worked to keep participants informed, craft panel activities, and synthesise results. Council staff led a crash course in Planning 101, were on hand to answer technical questions, and provided ongoing feedback between sessions.

Effort was even directed towards filling in blindspots: community groups poorly represented amongst panel participants (the very young and the very old for example, or migrants from non-English speaking countries) and special-interest advisory groups (cyclists, business owners, visual artists) were co-opted to provide insight into their specific needs by way of detailed reports and summarised recommendations.

The data gathered each session was dutifully and thoroughly analysed. Hundreds of ideas, arguments and comments were distilled into thematic groups that were then distributed to participants and used to structure the subsequent session’s activities. While I sensed that the trajectory of Liveable Yarra was carefully designed, the content for each session was driven by the participants, so could only be locked down after the preceding one yielded its results. I imagine that Yarra and Capire were extremely busy throughout the panel period, absorbing and directing this flow of information. 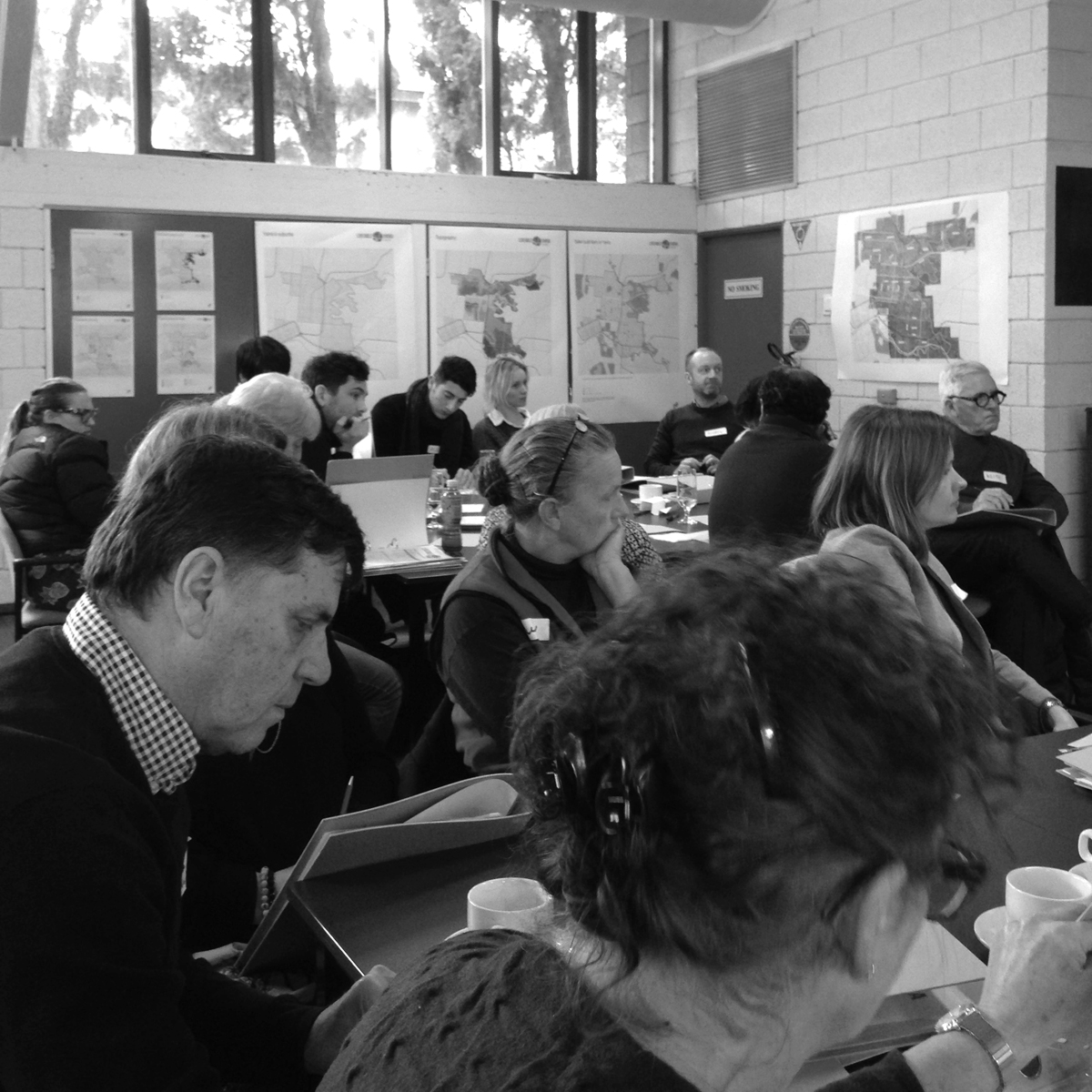 The issues covered by Liveable Yarra were complex and without clearly right or wrong answers. This was emphasised repeatedly by Yarra and Capire, who wanted the greyness of the issues to provide a challenge to think creatively, as well as a crutch to fall back on when ideas weren’t easily forthcoming.

Yarra and Capire employed a number of different methods to help us tackle this complexity. The result was that no two sessions were alike, each approaching the panel themes from different directions. A common thread perhaps was an urging to think big but consider the real-world consequences of our proposals. This reinforced the idea that nothing in planning comes free of cost. If we vote for more parks, we’ll end up with fewer houses. If we want more pedestrian-friendly streets, we’ll have less car-parking.

During session #2 for example, the panel was divided into small tables and asked to identify the biggest planning challenges facing Yarra. We were also asked to consider the ways council could address these. By placing each challenge on an xy matrix, we were able to prioritise those that we felt were both most important and most difficult to address. Support for the stickiest ideas was then tested using the Poll Everywhere app, allowing us to vote for ideas via our mobile phones, and see the results in realtime on a projector screen at the front of the room.

During session #3, discussions at each table were provoked by leading questions like: “What is the most important transport change you would like to see in Yarra by 2035?”, “How can council actively plan for this change?” and “What would the positive and negative implications of this change be?” This spawned dozens and dozens of ideas and counter-ideas, which were later distilled into a limited number of action statements like: “Allow modernisation of some heritage areas to enable continued viable use of the property” or “Close local residential streets to through traffic to create living streets”.

During the final session, we were asked to consider this collection of planning proposals. We showed our support, neutrality or opposition to each statement by way of green, yellow and red stickers. Pinning these to the wall resulted in a visually rich colour field of ideas. Popular ideas, of which there were surprisingly many, were mostly green. Unpopular ideas, of which there were surprisingly few, were mostly red. 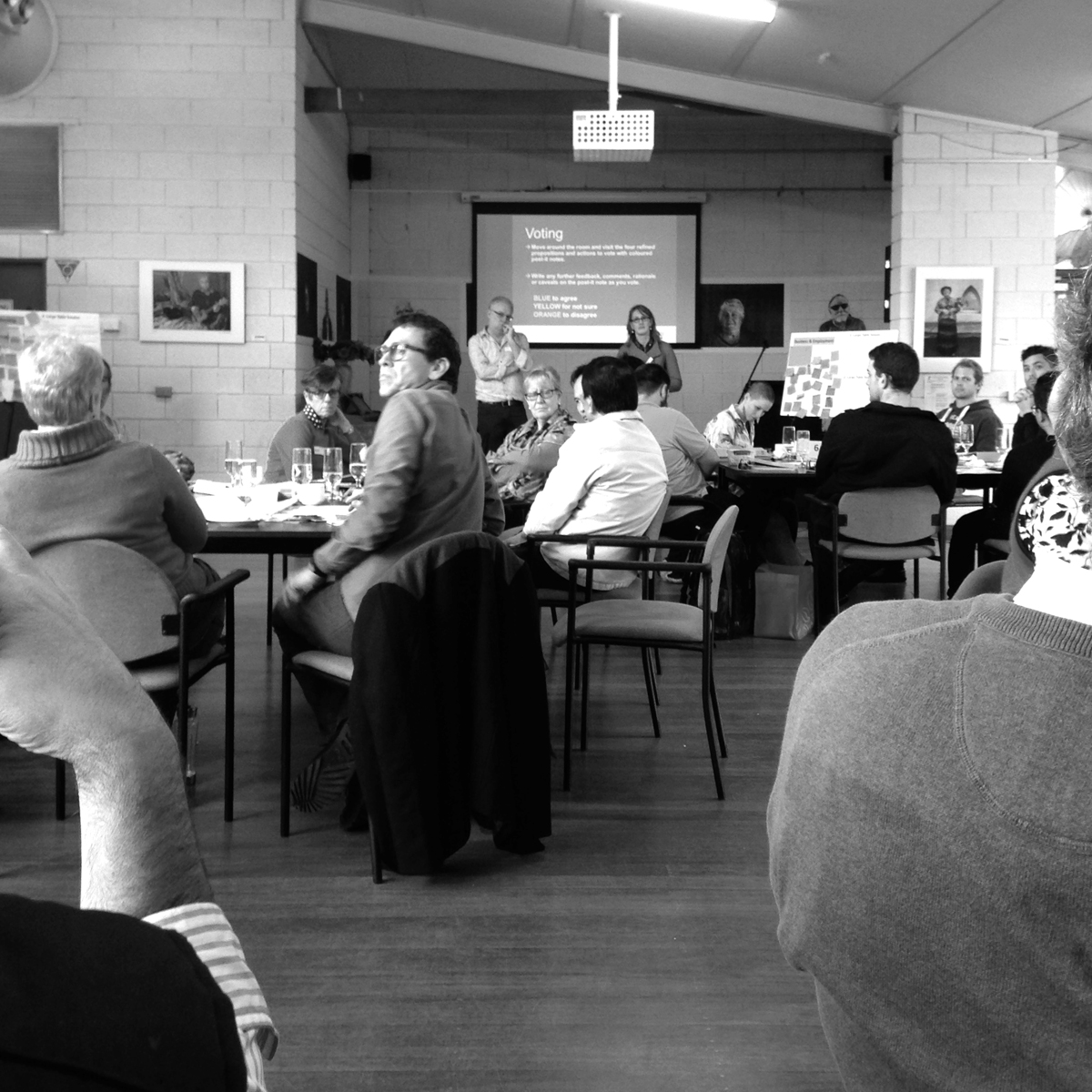 As Liveable Yarra progressed, I grew curious about its endgame. In particular, I was worried that somehow we would be expected to reach consensus. As the rabbinical proverb goes, when you ask two people for their advice about something, you inevitably receive three opinions.

This was made awkwardly apparent to me during one of the sessions when I sat next to a particular gentleman with very car-centric, and dare I say outdated, ideas about the city. His solution for poor accessibility to amenities was for council to purchase large tracts of land and convert them into multi-storey carparks. His even more radical solution for congestion was to submerge all the radial train lines across Melbourne and build freeways over them.

With minds like this contributing to a discussion otherwise populated by a wonderfully forward-focussed group of people, how could we ever agree on anything?

Luckily, Yarra and Capire had this issue covered. The aim of Liveable Yarra turned out not  to be consensus, but provocation. They didn’t want us to reduce our ideas to a couple of sparse recommendations to council, they wanted us to proliferate them. Our job was to provide insight into the diverse needs of a community, it will be council’s job to decide which ideas to throw away and which to champion.

That said, I was struck by the resounding agreement revealed by the colour field experiment in the final session. Of the thirty or so action statements presented, barely a handful featured any red, and almost all were dominated by green. The ideas came from us and were thoroughly explored during our discussions, so perhaps it’s only natural that they be met with support. I think this success was also testament to Yarra and Capire’s proficiency, as well as the panel’s enthusiasm for the issues covered.

The panel participants need to be recognised here. Of the 60 who started, only 11 dropped out. This meant that 49 remained committed to lively conversation and visionary speculation across four precious Saturday mornings. It felt like there was a great deal of goodwill in the room: we could all sense that Yarra and Capire had invested heavily in us, so we responded by wanting to make a positive contribution.

If there were any shortcomings at all, it was the scarcity of time. I acknowledge that there are only so many hours you can ask of people, but we always seemed to run out of time just when we got to the juicy part of a discussion. During the final session, I asked acting Yarra Mayor Geoff Barbour whether in an ideal world he would have liked more time for the panel, six sessions maybe or even eight. His rather sage answer was that no matter how generously you plan an event like this, you always want more time. 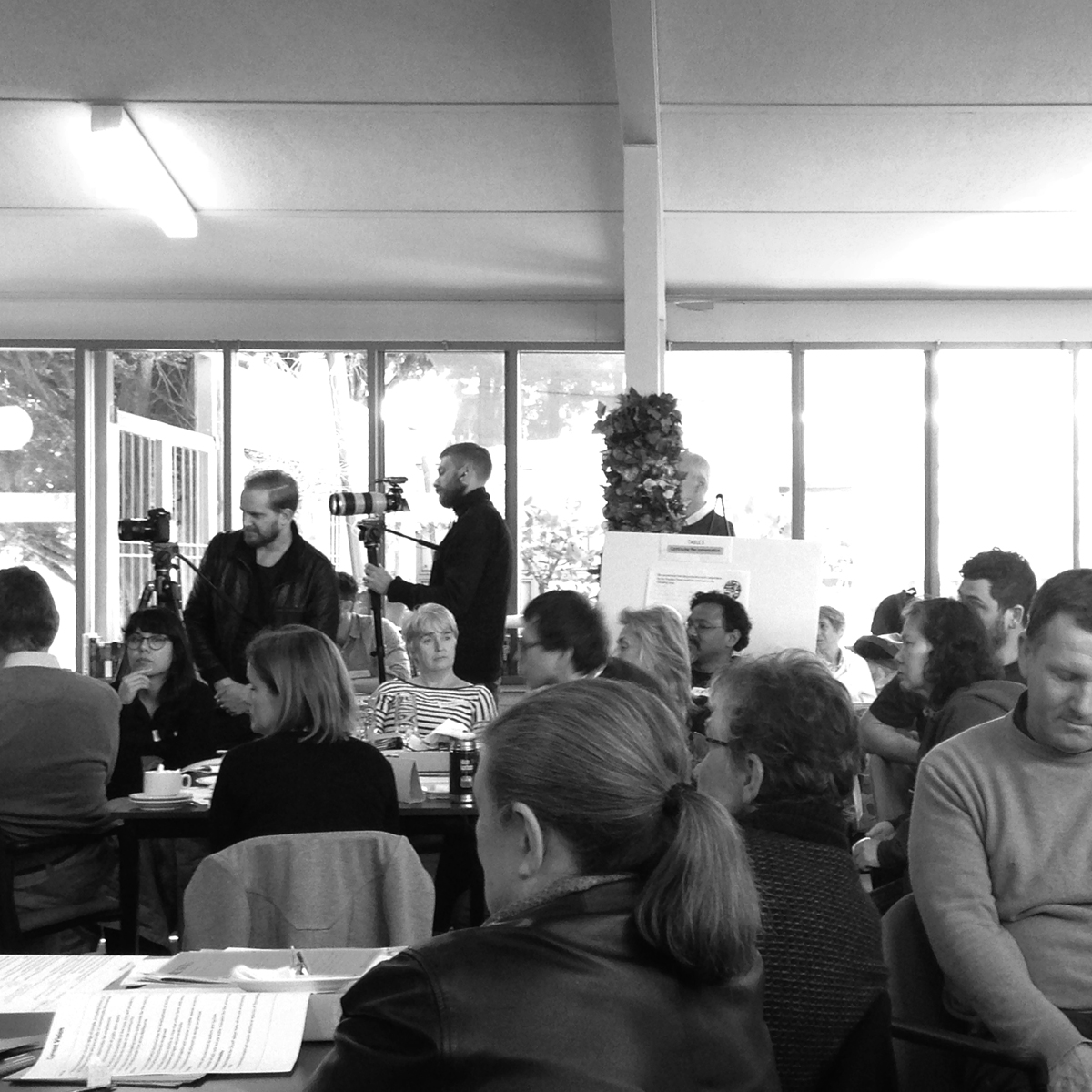 If I sound overly enthusiastic about the panel, it’s nothing more than is deserved. Yarra CEO, Vijaya Vaidyanath, claimed Liveable Yarra was among a select group of engagement events pioneering new modes of community consultation, and among the first people’s panels convened by local government in Australia. For my part, I felt that the panel was open, ambitious, well-executed and sincere.

As a community engagement initiative, I think it was a resounding success. It extracted unexpected consensus on a complex series of issues. It educated a motivated group of people about the nuanced balancing act of planning. And I imagine it created a few citizen advocates for more planning vision from council.

Of course, the real test comes over the coming years, as Yarra absorbs our input and formulates its new strategic statement. I hope to be part of a small group of panel participants who will remain involved beyond the initial engagement phase, and present our ideas to council. With luck, I’ll even get to see the ideas find their way into policy and then action.

One thought on “Liveable Yarra”