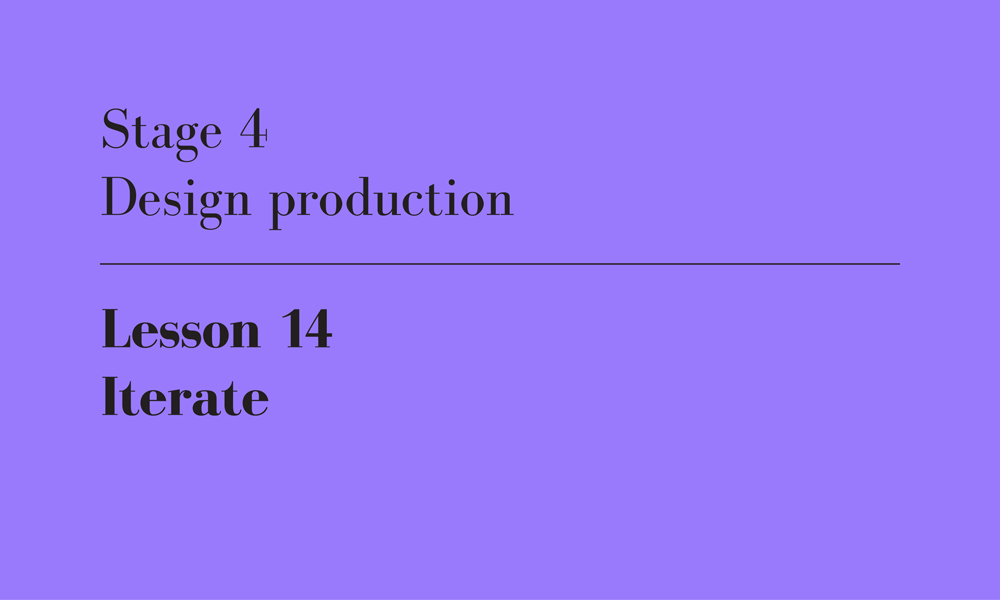 This is the 14th of twenty-one lessons for design students, gathered from the combined experience of being a student, and teaching students. I will published one lesson each weekday until they’re done.

In complete and unashamed contradiction of my last article, I am now about to explain why it’s important to iterate your design (to move sideways through a project and not forwards).

To return to Ed Catmull again, iteration is necessary because in the beginning, your design will suck. It will suck because hopefully your idea is risky and ambitious, because you’re trying to push the boundaries of both your own abilities and general architectural discourse.

But Catmull notes that this is how it should be: getting any ambitious creative undertaking right the first time is highly unlikely. “Creativity has to start somewhere, and we [Pixar] are true believers in the power of bracing, candid feedback and the iterative process – reworking, reworking and reworking again… to take our movies from suck to not suck.”[1]

Iteration is another way of saying experimentation. This means trying an idea, then if it fails, varying it slightly and trying again. You will need to let go of the urge to control everything, and embrace the uncertainty of the unknown. You will spend many weeks in the dark, not knowing when you’ll see the light at the end of the tunnel. For some students, this is a deal breaker. I’ve had one or two who got lost and never found their way back again. But for the students who can remain productive within the ambiguity of iteration, the results can be powerful.[2]

Curiously, I’ve had successful students engage with this process both deliberately and accidentally.

An example of the former was a student interested in the interstitial, or the innumerable states that lie between fixed ideas. He explored the architectural tectonics of the in-between, using iterative model making to test, for example, all the ways he could make a wall that was neither opaque nor transparent. His experimentation was tightly focussed and highly productive.

An example of the latter was a student searching for deep meaning to underpin his project. For weeks it seemed he couldn’t get ahead, each studio session arriving with another complex idea that didn’t quite seem to fit. But what appeared to be a fruitless search resulted in an epiphany halfway into the semester, an architectural story about history, immigration and poetry. His experimentation was vague and wandering, less productive but ultimately just as successful.