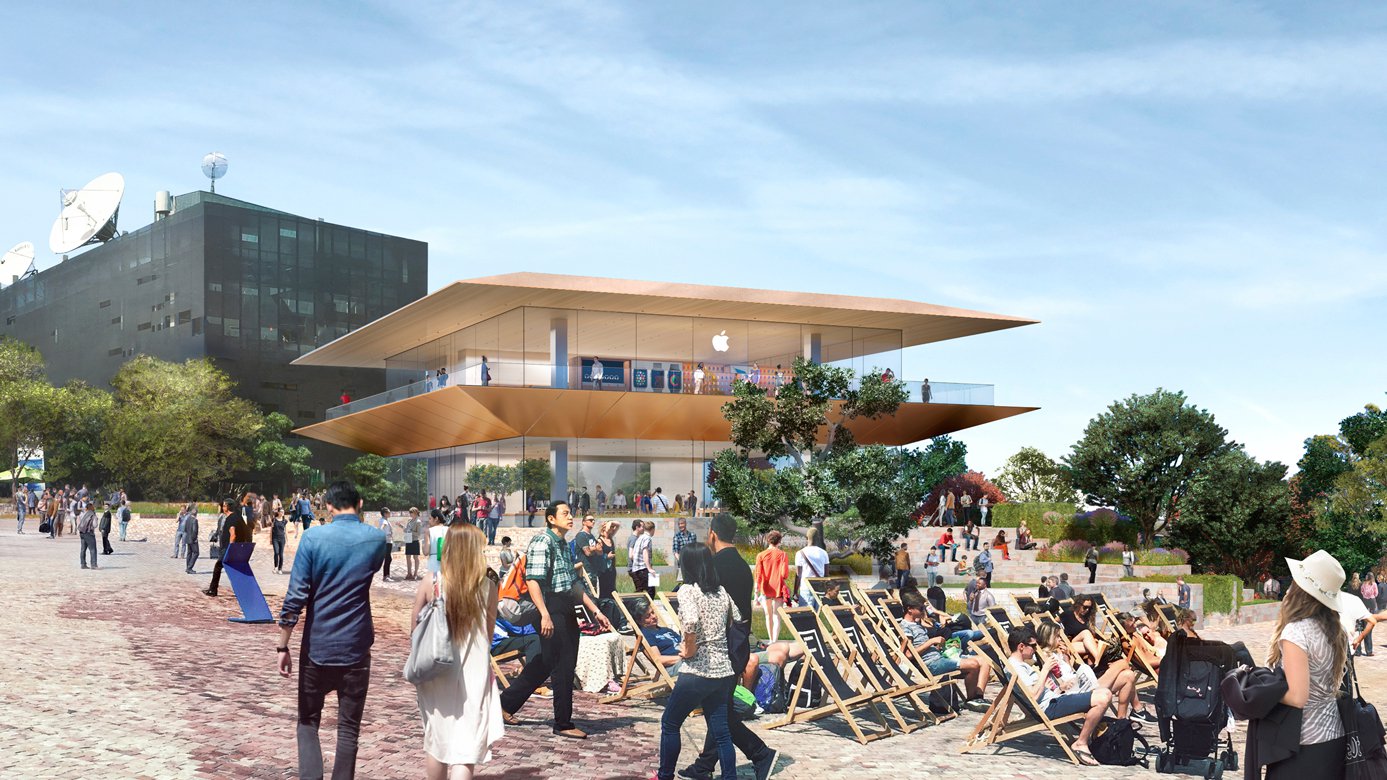 I penned an ArchiTeam media release opposing the development of an Apple concept store at Federation Square, it goes like this:

ArchiTeam opposes the development of an Apple concept store at Federation Square.

The demolition of the Yarra Building at Federation Square and construction of an Apple flagship store in its place disregards the built context of the square, attacks the values of Melbourne’s most important civic space and alarmingly corporatises the public realm.

Federation Square is an holistic work of architecture by LAB Architecture Studio in collaboration with Bates Smart. Its design language is intimately tied to the laneway character, materiality and urban context of Melbourne. While its individual buildings each provide valuable programmes and activities, it is their common architectural language and assembly within a unified public space that underpin their importance to our Arts, Cultural and Sporting precincts.

A recently added canopy at the east edge of the Federation Square plaza by Maddison Architects offers a new architectural language that successfully engages with the fractal geometries and asymmetry of LAB’s original design. In contrast, Foster and Partners‘ design for the Apple store overrides local context in favour of Apple’s global architectural branding. ArchiTeam believes this is not an acceptable design response for the future heritage of Federation Square.

ArchiTeam also contests the demolition of the Yarra Building, after only fifteen years of use. The environmental and financial resources embedded in this building are irreplaceable, and should provide Melbourne with a lifespan measured in the generations. Melburnians deserve more from the resources consumed to create their public buildings.

Like Sydney’s Opera House, Federation Square has a controversial history. Its western shard was infamously deleted when Jeff Kennett lost power in 1999, and its aesthetics were at first unloved by many Melburnians. However, in the years since its opening in 2002, it has become as much a part of Melbourne as the Shrine, the Tan or the Queen Vic Markets.

Federation Square is, first and foremost, a civic space. Its predominantly public buildings are gathered around Melbourne’s most important public plaza, which between them host thousands of events and millions of visitors each year.

ArchiTeam recognises that the success of Federation Square is as much due to its varied commercial functions as its public ones. However, it is necessary that the former remain as support acts for the latter. The Civic and Cultural Charter of Federation Square reinforce this hierarchy with ambitious cultural objectives ably addressed by its current programming activities. Notably, nowhere does the Charter validate the incursion of a global technology corporation, nor the demolition of an existing building to do so.

Though Federation Square is managed by a private organisation, and incorporates commercial functions, it is owned by the State of Victoria on behalf of the people of Victoria. It facilitates the public life of our great city because it is a great public space. The introduction of an Apple concept store upsets the balance of functions within Federation Square, and endangers the civic values it has come to exemplify.

ArchiTeam acknowledges that the Yarra Building at Federation Square was intended from the outset, and remains, a predominantly commercial building. Its renovation to accommodate another commercial activity, for example a regular Apple store, would be an acceptable evolution of Federation Square’s mix of functions.

However, this is not what has been proposed. The Apple concept store overwrites the existing context, both in terms of its built fabric and the planning scheme that protects it. ArchiTeam understands that the State Government has introduced Planning Scheme Amendment C314 to enable development of the store, and is disappointed that neither this amendment, Foster and Partners’ design proposal, nor the commercial deal struck between the government and Apple, have been subject to public scrutiny.

The Apple concept store is in essence an unsolicited development proposal that for reasons unknown has been exempted from the planning permit requirements that normally apply to Federation Square, and indeed the rest of Victoria. It represents not only the corporatisation of a piece of public land, but of the entire public realm.

ArchiTeam is gravely concerned that the Apple concept store sets a disastrous precedent that puts corporate interests ahead of community involvement, undermines an already fragile planning system, and prevents the development and execution of an holistic planning and infrastructure vision for Melbourne.

The State Government should recognise Federation Square as the essential public space it is, and protect its future heritage by considering only sensitive adaptations of its existing built fabric. ArchiTeam believes the existing Yarra Building should be retained, or adaptively repurposed to suit a new function. New designs should be procured by public competition in accordance with the Australian Institute of Architects’ guidelines for architectural design competitions, and provide an opportunity for public scrutiny and consultation.

Melbourne deserves a great public realm, and elected officials with the vision and tenacity to protect it.

A word from ArchiTeam members

Founded in 1991, ArchiTeam is a membership association for Australian architects working in small, medium and emerging practices. With over 600 members, we are the leading dedicated voice of Australia’s small architectural practices. A recent forum discussion revealed a strong consensus in opposition to the Apple concept store:

“The Apple concept store is a terrible decision, a complete waste of an existing building that frames the Federation Square plaza beautifully.”
– Anthony Windust, Windust Architects

“This is so outrageous on so many levels, our planning minister appears eager to please developers at our expense.”
– Fooi-Ling Khoo, Oof! Architects

“We deserve to have our cultural institutions and public places, regardless of their age, protected for the use and enjoyment of future generations.”
– Redmond Hamlett, Woollan Hamlett Architects

“The Apple concept store is an inappropriate commercialisation of a public space by a multinational conglomerate that incidentally avoids its social responsibility by avoiding paying tax in Australia.”
– Matthew Green, OMG Architects