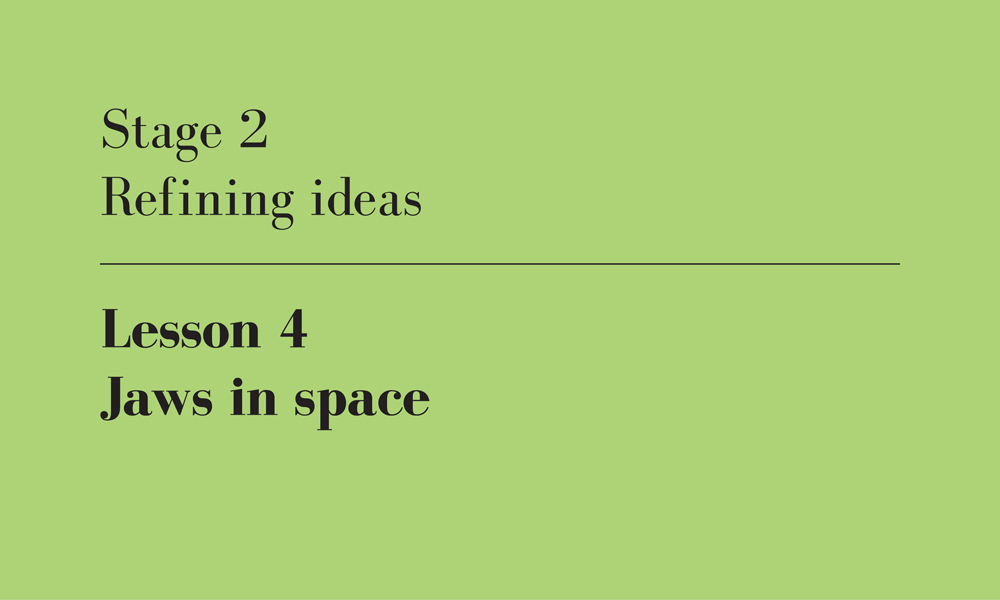 This is the 4th of twenty-one lessons for design students, gathered from the combined experience of being a student, and teaching students. I will published one lesson each weekday until they’re done.

It is rumoured that big Hollywood film studios have the attention spans of goldfish. When pitching a film therefore, a director is required to distill all its majesty, nuance and complexity into a single soundbite. It is also rumoured that when Ridley Scott did so for his 1979 classic, he said:

What I love about this story, true or not, is how evocative it is. Think about Jaws for a second: the terror of a great white shark coming for you while you’re stranded in the water. You’re in his domain, and he’s purpose-built for killing. There are grizzled surfer types who are called upon to save the world, there are screaming bystanders, outrageous action sequences and plenty of gore. Is there any idea more terrifying than the unexplored depths of the world’s oceans?

Well yes, it just so happens there is. All you need to do is swap the cold, deep waters surrounding the island of Amity with the colder, deeper vacuum surrounding the metallic hull of Nostromo.

Jaws in space tells you everything you need to know about Alien, not the plot or the characters or the detail, but the big picture, the sweeping gesture. With extraordinary frugality, Scott capitalised on the recent excitement of Jaws (released just four years earlier), then vividly promised something better. Jaws in space was really another way of saying Jaws only more dangerous, more exciting, more lucrative.

This is a lesson I impart to my students repeatedly, so much so that I’m certain they grow sick of it. I ask them to begin every feedback session with their own Jaws in space project description. It forces them to distill their ideas to their essence, and to do so both efficiently and vividly. If a student can’t reduce all the complexity of her project into a few words, then it means she don’t understand it yet. And if she doesn’t understand it, then how can she develop it?